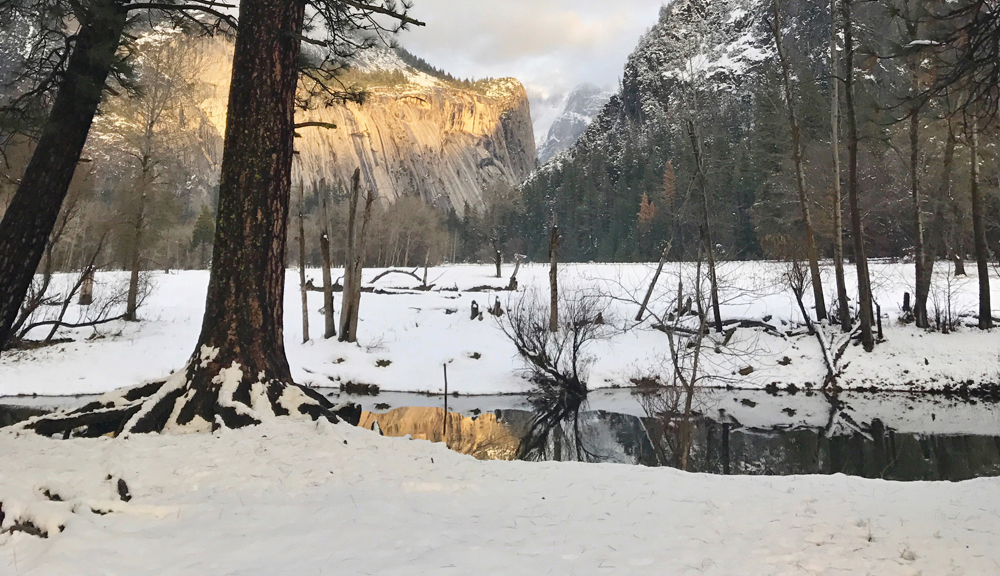 Los Angeles actually had winter this year. Like buckets and buckets AND BUCKETS of rain. And while there are people here whining about how cloudy and cold it is, most people are just really thankful for the wetness. The last five years have been nothing short of apocalyptic here. Hot winters, no rain, dust everywhere, everything brown and dry and brittle and ready to start on fire at any moment. It felt like that scene in ‘Terminator 2: Judgement Day’ where LA explodes into flames and Sarah Connor is a melting skeleton clinging to a chain-link fence, screaming her goddamn head off. It’s nice living in a place with such warm weather, but I have never been so thankful for water falling out of the sky as I have been this year.

LA has been having one of our coldest, most fun-filled, dramatic winter in ages, it seems like the rest of the country is experiencing the opposite. Apparently it’s 70 degrees in New York today? With all this crazy weather, it’s kind of easy to forget it’s winter. So I thought I’d share some images I took of a trip I took to Yosemite a few months ago, when the snow was snowy, the winter sky was wintry, and the cold was COLD.

This is also an opportunity for me to take you on a little tour of my hometown. Perhaps one of (the only?) interesting things about me is that I was raised in a national park. My parents both worked in Yosemite and so we moved there when I was five. My father was the park’s dentist and my mother taught at the little grammar school there. It’s really the only place I remember living before leaving for college. It was as weird and magical as you might imagine. This insane waterfall was literally in my backyard:

When I was a sullen, gross, depressed teenager with bleached blond hair who wore really ugly sweaters from J.Crew and neon green pants, I used to take walks around the valley. The Merced River runs throughout the park and watching it is mesmerizing AF.

My sister got married in this little clearing. Like not during this trip but before. In the summer. When there was no snow. It was gorgeous.

When I was little, my friends and I thought it was really fun to play inside this beautiful old lodge, the Ahwahnee Hotel (built in 1927). We’d play in the elevator and meet hotel guests, who probably thought we were homeless. Last year, due to a corporation claiming to own the trademark to the historic Ahwahnee Hotel name, the hotel (and many other park destinations) was forced to change its name. The new name? The Majestic Hotel. NO THANKS, NO MA’AM. Unsurprisingly, all the locals were pissed. The idea that a private company can claim to own the rights to names in a national park is completely disgusting. If anyone can lay claim to the Ahwahnee name, it’s the Ahwahneechee people, the original inhabitants of the park and for whom the hotel was named.

The interiors at the Ahwahnee (I’m not calling it that other thing) are beautiful and were the inspiration for the interior sets created for ‘The Shining’ (check out this old school post showing the similarities). I’d originally planned this as a romantic weekend getaway for my ex and I, but he dumped me right before we were supposed to leave. My visit here was a bit bittersweet. I’d always wanted to stay there because I grew up playing in these grand lounges, but being there alone was pretty painful. If you’re not in a great place emotionally, giant historic spaces can amplify your loneliness.

I love this mural, a sort of 1930s stylization of Native American basketry above the fireplace outside the dining room. The hotel (and many other grand lodges from that time period) has a heavy Southwestern influence. It can be confusing, because the art and objects made by the Ahwahneechee and Miwok people who called Yosemite home actually looks a lot different than many of the pots and jewelry in the local gift shops (which come mostly from the Hopi and other Southwestern tribes).

Cook’s Meadow isn’t a far walk from my childhood home and it has a great path with beautiful vistas I used to wander around in. I think Yosemite is so popular because it’s so easy to see all the pretty spots. You just have to walk (or drive) around and they’re all right there, waiting to pop your eyeballs.

Half Dome has always been my least favorite Yosemite landmark. Probably because I got sick of seeing its shape on too many cheesy t-shirts and coffee mugs. But she can be pretty and mysterious when she needs to be.

This is one of my favorite meadows in Yosemite. Where you can see the most beautiful sunsets ON EARTH.

When I visited, Yosemite Falls had just gotten started again (it dies down in the summer/fall before adequate precipitation brings it back). After months of torrential rains (and flooding in the park) the falls are raging now.

They tore down the ice rink where I grew up skating last year. This little zamboni hut, adorned with the skating rink rules, is all that’s left. I was sad to see it go. I guess they’re building one somewhere else. I’d sort of get it if they were tearing it out forever and restoring the land, but apparently it’s going to be a parking lot or something. I don’t think it’s ever easy to say goodbye to places that hold great memories. Life goes on, and the small things you lose live inside your brain as long as you need them to.

One of the easiest (and most stunning) hikes in Yosemite is the Mirror Lake Trail. I actually wouldn’t even call it a hike. It’s paved. I feel like once something is paved it’s downgraded to “walk” status.

The trail behind my house that leads to the Lower Yosemite Falls. DON’T YOU JUST WANNA EAT THAT SNOW??? Literally looks like cupcakes.

The little “cabin” where I grew up. It’s been empty for more than two years since my parents fully moved out and relocated to Sonoma County. People used to walk by and be like “HOW’D U RENT THAT CABIN?” And I’d be like “HOW DARE U THAT’S MY HOUSE.” It’s cute when you call your own home a cabin but offensive if someone else does.

My sister and I snuck into the (unlocked) house to check out what was going going on and found construction messes everywhere. We were kind of surprised that they hadn’t made more progress, but also relieved that no one was living there yet. I feel like when a new family moves in I’m going to go full-on Geena Davis/Alec Baldwin ‘Beetlejuice’ ghost on them and try to haunt them away before they can paint the fireplace with speckle-granite paint.

A whole life of memories lives in this living room. Like so many Christmas mornings and temper tantrums and getting home from school, rushing over to sit by the fireplace because it was so cold.

You know how sometimes something looks super close in real life and then you take a picture of it and it looks super far away? I have that issue all the time when I try to take a picture of the Hollywood sign (which I do, like, weekly because I’m trash). Well, in that spirit, here’s a photo of Yosemite falls through the window in my childhood bedroom. The falls were relatively tame during this trip, but their force used to rattle my windows in the spring months. I was scared of ghosts, so this would terrify me beyond belief.

The trip home was definitely one of the more surreal I’ve ever taken. The combination of the recent breakup, being alone for most of it (my sister came and kept me company for one night, then I was on my own), and the absolutely perfect winter weather made for a ravishingly sad and glamorous visit. For anyone who’s been recently dumped, I highly recommend a trip out into the wild. Especially if the place has meaning for you. I will always be grateful for the strange and lovely childhood I had in Yosemite. It wasn’t without its own issues (mostly feeling isolated), but it gave me the quiet to develop in a way I might not have otherwise. And knowing that makes it a great place to go looking for myself when I think I’m lost.