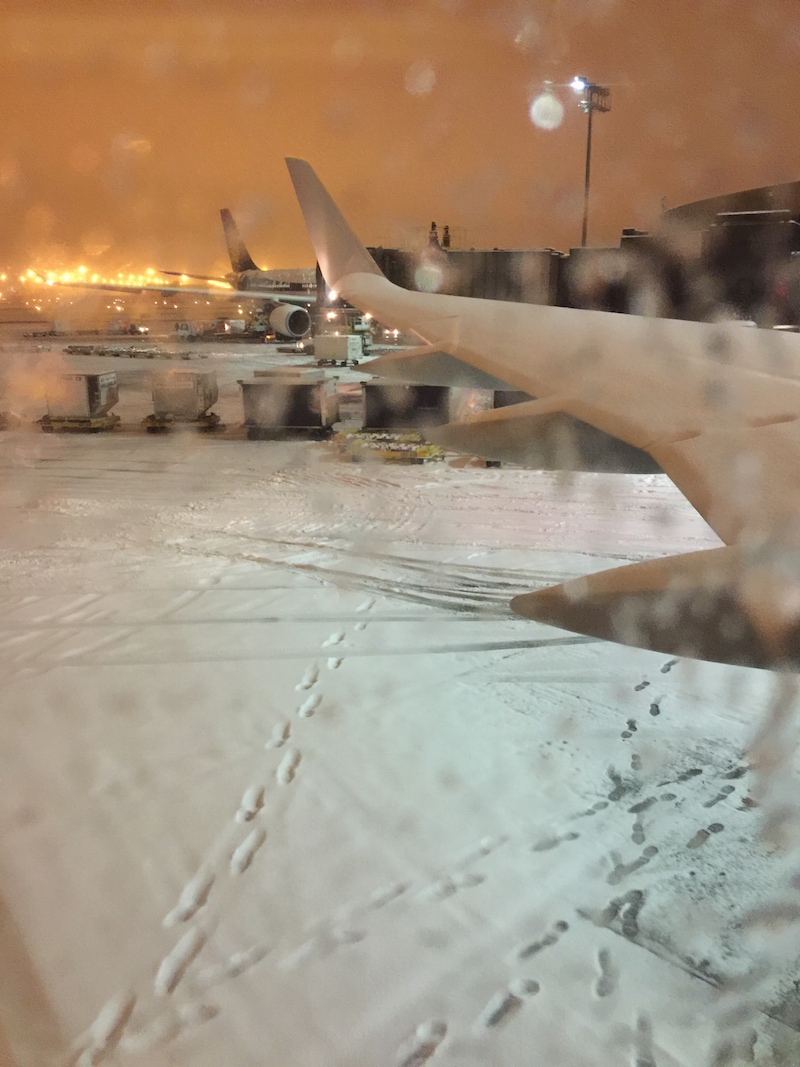 Since graduating school I haven’t done a lot of world travel. I’ve never had the time and the money (at the same time) to go on extravagant world adventures. And honestly I haven’t really missed it. I’ve gotten to travel around the US and that has been wonderful and felt luxurious.

Because of how I was raised, where I went to school, and professional luck, I graduated into a class of people who seem to take international travel for granted, as if not going abroad is some kind of hardship. I guess this has always kind of irked for a few reasons. Firstly, the assumption that a lot of travel-privelged have that there is some sort of transcendent experience only they understand because of their travel that non-travelers wouldn’t understand. Yes, travel is educational and expands worldview, but so does meeting new people from diverse backgrounds and exploring neighborhoods outside your own. The assumption that people who don’t travel are somehow small-minded has always driven me nuts.

The second thing that always bothered me about a particular type of snobby world traveler is how classist and condescending they can be. “Oh my god you haven’t been to Paris?!? That’s crazy!” As if Paris was as far away as Bakersfield and as cheap to stay in.

Finally, I’m wary of travelers who seem to be posting a picture of themselves in a new part of the world every month (we bloggers are especially guilty of this type of activity, which is probably why I’m so conscious of it). It’s like, LEAVE ME ALONE I’M EATING TUNA FROM A CAN ALONE IN A DARK ROOM, CRYING. The hyperperformativity of travel in the social media age can be exhausting.

Anyway, I’m not writing all this to be a total Debbie Downer about traveling. I’m not anti-travel. I’m just anti- people who make obnoxious assumptions about people who can’t or don’t travel internationally. Traveling is a huge privilege and should be seen as one. It’s not exactly the best thing for the environment for planes to be pumping CO2 directly into the atmosphere to travel the world every weekend so the notion that world travel is inherently virtuous is questionable.

All this being said, I was super excited when I found out my boyfriend had to go to France and Switzerland for his visa interview. For me, the most meaningful/interesting places to visit are those where you know someone. I’ve enjoyed Japan and Ireland and a few other countries with friends who grew up there who took me to their hometowns and showed me all the cool spots they remember and love. As someone who grew up in a tourist trap, I try my best to avoid being a tourist so I love visiting with locals and doing things that actual non-dork normal locals do. When you grow up with tourists screaming stupid questions into your face every time you leave the house, you come to resent their existence (I grew up in Yosemite Valley, which gets about 4 million visitors every year in an area that is only 7 x 1 miles. Typical tourist questions include “When do they turn on the waterfall?” and “Do they still do that thing where they let us feed garbage to the bears?”).

Anyway, why am I writing about all this? Oh yeah, I have a point. I guess my point is that I have a sort of complicated relationship with traveling. I’ve always been critical of the idea that travel is some sort of status symbol, a way to check typical travel destinations (Paris, Rome, London) off a list so you can say you’ve been there. I think travel should be an opportunity to seek out interesting places that mean something to you, not just go to the same five European countries most Americans aspire to go to.

This trip happened about a month ago and it was snowy in New York (where I was working from Homepolish Headquarters), which was totally an adventure. The flight was delayed by four hours (like the kind of delayed where you get on the plane then they’re like “oh my god there’s snow all over the plane we can’t move!”). I love New York, but they really need to get it together about snow. Like, hi. You guys built a city here and it snows. So every winter, snow will come out of the sky and cover your airports and it will be really inconvenient. So stop acting like it’s a natural disaster every time it snows! When it snows apparently they have to spray the planes with chemicals to get all the snow off. But Newark airport has like one of these machines for like hundreds of planes, which is why the flight was so delayed. Literally, get it together.

Anyway, my boyfriend snagged me from the airport because I am a dumb American who doesn’t speak French. I pretty much turned off my brain as soon as I landed and let him talk for me the whole time. It was kind of the best thing ever and I want to go back to that life forever.

This statue best represents how jet lagged I felt.

Pretty much the only reason to go to Europe is the Bon Marche. It’s the most glamorous grocery/gift/clothing/everything market that exists and it kind of makes you mad that regular grocery stores are so gross in comparison.

I couldn’t stop laughing at the warning signs in the metro. The French are such drama queens.

This is the cute little Airbnb we stayed at for the first part of our Paris trip. And my boyfriend sleeping like a little angel. Naturally, I stood over him as he did this, sweating and mouth breathing, taking pictures like a creep.

In addition to talking for me the entire time we were in Europe, my boyfriend also got up early every morning to go to the Bon Marche to buy the most delicious carbs I’ve ever eaten in my whole worthless life. They looked like this. Also, saying “my boyfriend” is gonna get old. His name is Edouard. Which I love because it’s even harder to pronounce than mine.

Versailles was disgusting. But like in a historically-relevant, respectable way that made me want to eat cake and drink tea with Sophia Coppola and Kirsten Dunst.

HOW MUCH DO YOU LOVE THAT TILE PATTERN IN FRONT OF VERSAILLES? I kinda want to do that in Edouard’s bathroom (I’m redoing his condo right now and it’s gonna be SECK. More on that soon).

The ornate parts of Versailles pretty much made me wanna vom but the simpler parts were just stunning.

I loved this dirty swan getting way judged by those other snobby, clean swans.

I was obsessed with this statue at Versailles. He literally can’t even.

Some cool wall mural/installation near our Airbnb.

Literally every meal I ate there was the best and totally unhealthy and I should be obese now but there’s this totally unfair scientific reality in France where everyone just eats fatty gargbagefood all the time and literally no one gets fat ever. It’s so unfair.

The second part of our trip took us to Switzerland, where we stopped in Bern for Edouard to have his visa interview (spoiler: THEY LET HIM BACK IN! YAY!) then went on the most luxurious ski vacation anyone has ever been on in the history of the whole entire world.

This is the Swiss bank where I hide all my money JUST KIDDING WHAT MONEY!?!

Most of Europe looked like the foreign movies I watched growing up with my family. Where the mom would have some sort of life realization and ride her bike around while crying but then the gay son would get in a car crash and everyone would realize they really loved each other and they’d express their affection in the most repressed, European way possible.

Bern is a beautiful little city that everyone in Europe makes fun of. So it’s pretty much the Bakersfield of Europe.

Some cafe where I went while Ed did his visa interview and I had to order a coffee in English which filled me with shame but the workers were so friendly that it kind of made me feel better.

This was in a town called Gruyere. Yes, like the cheese. Most of small town Europe looks like “Beauty and the Beast.” Like so much so that it made me wonder if every Disney movie I’d seen was actually a documentary.

<Insert that part where Belle sings to sheep>

We made our way to Gstaad, a disgustingly glamorous ski resort in the Swiss Alps.

It’s, like, a city ordinance in Gstaad that everything be built in the traditional chalet style. So the whole town looks like a gingerbread village. It’s the best thing ever.

The view from our hotel, Le Grand Chalet, was so gorgeous that I screamed in terror every time I looked at it.

We eventually made it back to Paris, where we got an Airbnb that came with a cat named Churchill (great name, right?). We loved Churchill until we found out he was also an alarm clock that woke us up every morning by clawing our eyeballs and scream-mewing directly into our ears.

So yeah, no Fashion Week for us. We did however, go to Club Sandwich. It was super fun mainly because of the laser lights and because Brad Goreski and other Fashion Week people were there acting Fashiony.

I forced Edouard, who was raised in Paris his whole life, to take me to the Eiffel Tower. Cheesy and touristy as it was, it was amazing to see it up close.

Also, it’s the most terrifying place I’ve ever been. It’s so high and it looks like it’s made of bobby pins and is going to fall if you sneeze.

Ed looking into the distance, thinking about how much he loves me.

The Louis Vuitton Foundation was amazing. Mainly because it’s a Gehry building that doesn’t look like a smashed burrito wrapped in an aluminum foil wrapper like all his other buildings THAT ALL LOOK THE SAME BTW.

I’m def not one of those people who takes food pics. Mostly because they always turn out looking like super shiny baby food barf. But I couldn’t resist taking pictures of what I ate in France because it was SOOOOOOOOO good, and, shockingly, didn’t photograph too disgustingly.

I was fascinated by these multi-million dollar tents set up for the Vuitton presentation for Fashion Week. They took weeks to set up and they had to cut trees down (which they are replanting). But then they just took them down the day after the show. I’m always amazed at stuff like this. Not like in a bad way just in a way where I’m like GIVE ME THE MONEY I’LL MAKE THE COOLEST HOUSE WITH IT THAT WILL LAST FOREVER.

Europe was insanely gorgeous and I’m still kind of reeling from how lucky I feel that I got to go. I want to go back, like, now. But for for the time being I will be content staring at these photos, weeping quietly, and waiting for the next time Ed has to go for some reason and I can just hide in his bag, popping out to terrify him.

27 thoughts on “That One Time in Europe”