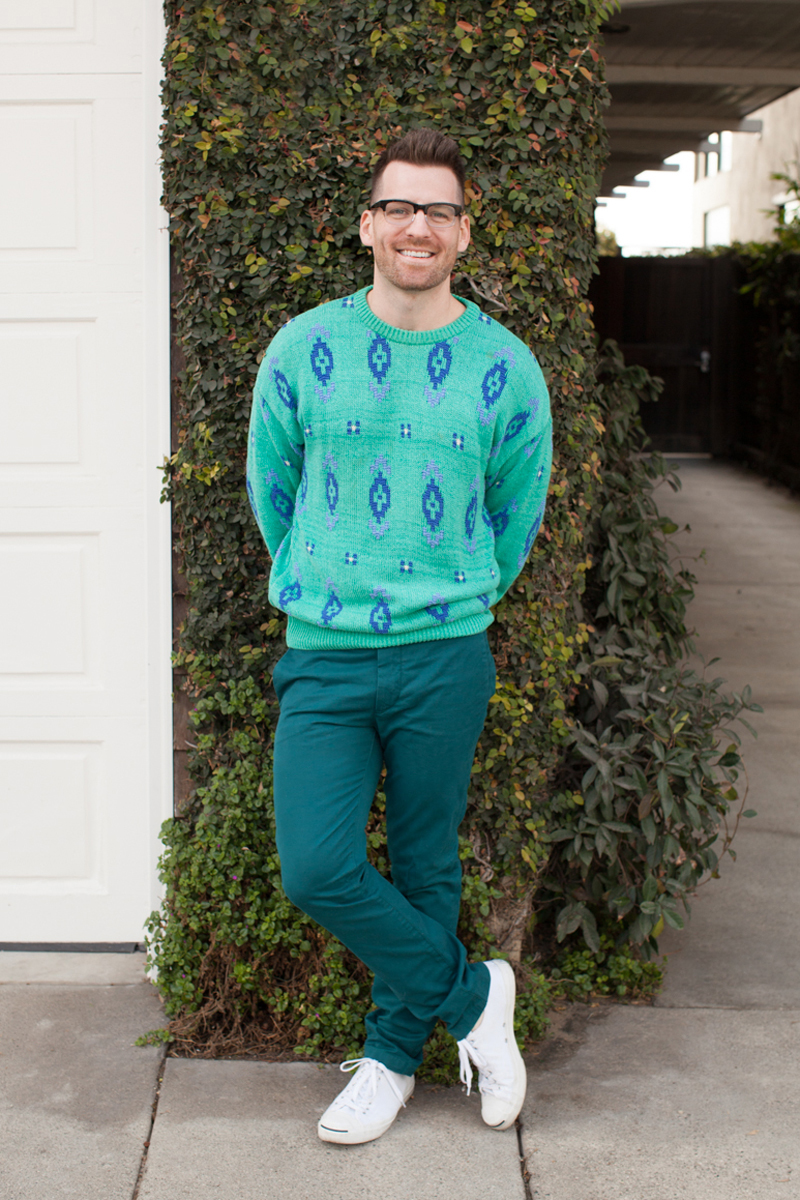 Thanks for always providing me with some fun when I can’t afford to go shopping. I can always count on finding something cool in you. My dad has always been a stylish man, mostly classic American brands like Levi’s, Pendleton, and 80s Ralph Lauren. Also those brands that we all used to be totally embarrassed by until we grew up and realized how classic and comforting they are (Lands’ End, L.L. Bean, etc). My dad’s style has been a big inspiration to me. So I’m starting a new mini-series about clothing items I like that I found in my father’s throwaway pile and how you can find things with a similar. This week I’m showcasing this controversial sweater:

Yup. That’s me. I’m looking into the distance wondering if my sweater is completely ridiculous and ugly. I think I’ve decided that yes, it is a ridiculous sweater, but no, it is not ugly. I admit that it looks like a Cosby sweater, but to me that’s not a bad thing. If you don’t like Bill Cosby there’s something wrong with you. He’s one of the people who you’re just not allowed to dislike. I decided to pair this sweater with some of my favorite Levi’s pants, some Jack Purcell’s, and some Warby Parker spectacles (yes, I’m one of those poser ass people who wears fake glasses sometimes, mainly to see if I can trick people into not recognizing me – it totally works).

I feel much the same way about fashion as I do about vintage – it’s good to mix vintage with new to make sure the look has some complexity. If it’s too much vintage from one era it looks like you’re wearing a period costume. Which makes you seem like you’re one of those people that wishes they lived in a different time period. And those people are totally annoying. Do you know what I mean? Like when a Gay guy is all “God, I wish I lived in the 1950s. All those cute rolled up white t-shirts and tight jeans and everyone looked like James Dean all the time!” And you’re like “If this was the 1950s you’d be in a mental institution getting shock therapy right now.” Don’t yearn for the past, because the past was totally gross. Anyway, I command you to ogle my sweater again:

Unfortunately, we do not have the same dad, you and me. This is sad for a few reasons. Firstly, because that means we will probably never hug and squeeze each other at Christmas. Second, because it means you don’t have access to my dad’s glamourcloset. So you have a few options. You can go out and seek a vintage sweater like this one (I love Jetrag in LA or What Goes Around Comes Around in New York). Or you can just do what I’d probably do and buy this stuff on the internet:

Now stop what you’re doing immediately and go get your Cosby on.

3 thoughts on “Fashion Felicitations from my Father’s Closet”