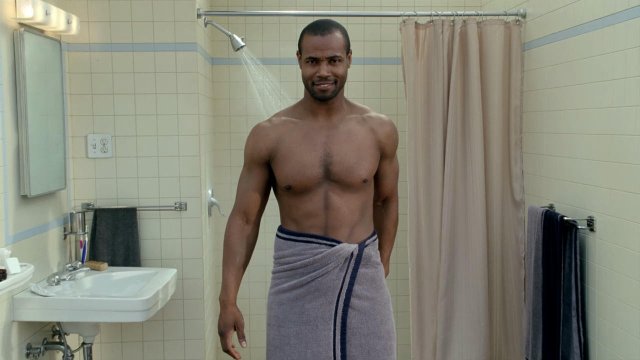 Did you know there is such thing as a “Gay Gym”? I did. A Gay Gym is like a regular gym except everyone is more attractive, there is a disproportionately male clientele, and there is 57% more body dysmorphia than at your traditional Straight Gym. Gay Gyms are normally located in homosexual neighborhoods in major cities. Two great examples include David Barton Gym in Chelsea in New York and Equinox on Sunset in Los Angeles. These gyms aren’t officially Gay, but the majority of the members are (some just don’t know it yet because I haven’t told them). Thus, they become a special world where Gays frolic and laugh whilst working on their CrazyGay bodies and avoiding eye contact.

1. Do act modestly and keep yourself covered in the locker room.

A while ago, I was working out at a Straight-Themed gym in Santa Monica and I noticed something. All the straight guys were running around naked in the locker room, without a care in the world. In straight gyms, dudes can get away with waddling around naked in the locker room because no one cares. It’s totally different in Gay Gyms. In Gay Gyms everyone keeps himself covered, shamefully changing from towel to undies as fast as possible to avoid any unwanted ogling.

2. Don’t run around like a streaker, naked in the locker room. It wont end well.

3. Do act with utmost dignity in the steam room.

In the steam room, most normal topics of conversation are off-limits. No talking about sex, parties, or money. Acceptable topics of conversation are limited to what you want to eat for dinner and what you ate for dinner yesterday. If necessary, you may also talk about what you ate for lunch, but even that could lead you down an inappropriate path. Anything that can be viewed as even remotely sexual could make you sound like a perv. And then everyone will get uncomfortable and leave the steam room. And then they’ll report you. And then you’ll be kicked out of the gym. And then you wont be able to work out. And then your life expectancy will drop. And then you’ll die.

4. Do not blow your nose into your towel in the steam room.

I know, the steam room releases some congestion that otherwise would not be released. But when you release your snot into your towel whilst sitting right next to me, it makes me want to release my barf all over your face. Just act like a normal person and wait to blow your nose until you’re in the shower. And do so in shame and isolation, thinking about how disgusting you are the whole time. That is the American way.

5. Do be friendly and courteous to your fellow gym members.

Go ahead! Wave to your friend Adam! High five his husband Steve! It’s fun to be social at the gym.

Are you ever staring off into space, wondering if Lark Voorhies and Tiffany Amber Thiessen ever hang out anymore, when all the sudden you realize that as you are gazing off into space you are staring at a scary man who is staring right back at you, salivating and biting his lip? This is to be avoided at all costs. As a gay man at the gym, you should never make eye contact with anyone. The best way to avoid eye contact is to awkwardly dart your gaze around the room, never settling on one area  as to avoid dreaded eye contact with an unwanted Peeper. Sure, this will make you look like a crazy person. But would you rather be a crazy person or be obligated to talk to the Peeper?

7. Do feel free to shave your face in the gym’s sink area.

Shaving your face is a normal and healthy part of living in a society that forces you to undergo strange and bizarre beauty regimens in order to conform to conventional conceptions of beauty and hygiene. Go ahead, it’s fun!

8. Don’t shave your back, chest, or nether-region in the gym’s sink area.

Like watching Twilight: New Moon, shaving your chest and/or back is something you should do at home. In private. While crying. In shame. No one wants to watch you shave your chest in the gym mirror. There’s something awkward and too personal about it that makes me feel funny inside. Like the same funny as when I see parents feeding their newborn babies hamburgers from McDonald’s. Also, I just learned that most men don’t like their guys to have shaved chests anyway. I read it in an amazing academic survey done by intellectual powerhouse ManHunt, so it must be true.

9. Do say hello to your  friend when you see her next to the elliptical.

Hay gurl. How are you? Luv ur top!

10. Don’t get into a conversation about how your father never loved you with the person sitting next to you on the abs machine.

Are you ever, like, working out totally normally, thinking about how sweaty your face is when your friend comes over and starts talking to you about his breakup. And then he starts crying. And then you start crying. And then everyone starts crying and it’s like Oh-My-God? Well this is why you should never talk about deep things at the gym. The gym is an inherently superficial space. Conversation should be confined to cute guys, the mall, Anjelica Houston, and neon tank tops.

11. Do blow dry your hair until it is fluffy and perfectly coiffed like this guy:

Fine. Using the hairdryer at the gym can help you get the perfect hair you’ve always wanted. Maybe. Actually, your hair will probably never look as cool as this guy’s. He has the best hair on Earth. I want to die and come back as his hair, just so that my life means something, so I have a positive impact on the world.

12. Do not use the blow dryer to dry your entire body, that is what towels are for.

I used to get incensed when I’d see guys blow drying themselves at the gym. “USE A TOWEL!” I’d scream at them in my head. There is something inherently sketchy and creepy about using a blow dryer as a towel. Firstly, its a waste of energy and bad for the environment. Second, there’s something kind of sexual and creepy about blowing air all over your body whilst rubbing yourself and looking in a mirror, pursing your lips. That being said, in recent years I have become sweatier and sweatier, and I have been known to blow dry myself to cool off from time to time. If you see me doing this, don’t say anything. Judge me quietly, and then tell your friends about how weird and gross I am.

13. Do wear appropriate workout attire that makes you and everyone else around you comfortable, happy, and thinking of physical wellness.

14. Do not wear clothing that is inappropriately distracting, such as blue jeans, turtleneck sweaters, or nipple-exposing tank tops.

Any nipple-exposing tank top is a no-no. For some reason, in our culture we are not used to looking at nipples. Seeing them at the gym can be jarring and disorienting, leaving one incapable of working out. Other clothing items to avoid are jeans, high heels, and anything by Armani Exchange (side note: how did Giorgio ever let his name be used on such grossness?).

15. Do use your phone to make sure your dinner date knows what time you’re meeting.

Using your phone for totally necessary reasons is perfectly acceptable at the gym.

16. Don’t use your phone to have an hour-long conversation at full volume about how fun your weekend was and how much you liked that crazy party on Saturday.

The great thing about modern cell phones is that you don’t have to scream into them in order for the person on the other end of the line to hear you. You can speak at a normal tone about your private matters, venereal diseases, and hatred of your mother. And no one else has to hear. Everyone wins!

17. Do maintain your face with as many surgeries as you wish.

I don’t judge people who get plastic surgery. It’s your body, do what you want with it. Just kidding. I totally judge everyone who gets plastic surgery. Sure, many of them look fine. But lately I’ve been getting annoyed at the amount of duckfaces I see at the gym. A nip here? A tuck there? Who cares! But when everyone starts looking like cats and farmyard animals because their faces are pulled and pumped so much, I start to feel like I’ve been transported to an alien planet. Plastic surgery looks especially terrifying on older men, whose eye jobs can sometimes make them look like a cat head sewn onto a man’s body. Speaking of eye job, look at Lil’ Kim. She used to be a beautiful black woman. And now she’s an Asian grandma. Not that there’s anything wrong with being an Asian grandma. But now Lil’ Kim looks old and scary, when she could have continued to look 25 for the next 50 years. She is black, after all, and black people age better than everyone else. Chew on that, whitey!

18. Do not come to the gym immediately after said surgeries, no one wants to see that.

The other day I was on the treadmill and a lady with a nosejob bandage got on to the one next to me. I know it’s irrational, but for some reason I spent the whole workout worrying that her bandage was going to explode off and blood was going to squirt everywhere, all over my face. And then her old nose would grow back immediately. And she would run out of the gym crying. And it would be all my fault because I let her work out next to me. And it would haunt me for the rest of my life. Don’t let your plastic surgery haunt me for the rest of my life. Stay at home.

19. Do use the mirror to monitor your workout form.

Sometimes, the mirror is necessary to figure out if you’re doing the exercise right. For people who lack any physical coordination whatsoever (me), a mirror is a helpful tool to make sure you’re not doing jumping jacks when you think you’re doing push ups (if I had a dollar for every time I did that!).

20. Don’t use the mirror to monitor you awesome abs.

If an ab flexes under a shirt and no one is there to see it, does it actually exist?

I know you are worried that your abs might have packed up in left in the six minutes since you last looked at them, but trust me, they’re still there. There is no need to constantly lift up your shirt to make sure they still exist. If you get worried that your abs are gone, come over and ask me and I’ll reassure you, they’re still there. I know this because I have ab muscles, but I’ve never seen them because they are covered with my belly. But every once in a while, I feel them moving, so I know they’re in there. Take solace in that. Your abs will always be there for you. There is no need to constantly stare at them. They can survive without your constant love and affection.

If you must ogle your abs, just wait until you get home, then you can spend all night looking at them in the mirror. It will be totally fun. Maybe you can invite someone over to look at your abs and compliment them. And then you can have sex. With your abs. Alone. In the mirror. By yourself.

So that is what I have noticed in my travels to the Gay Gym. What about you?