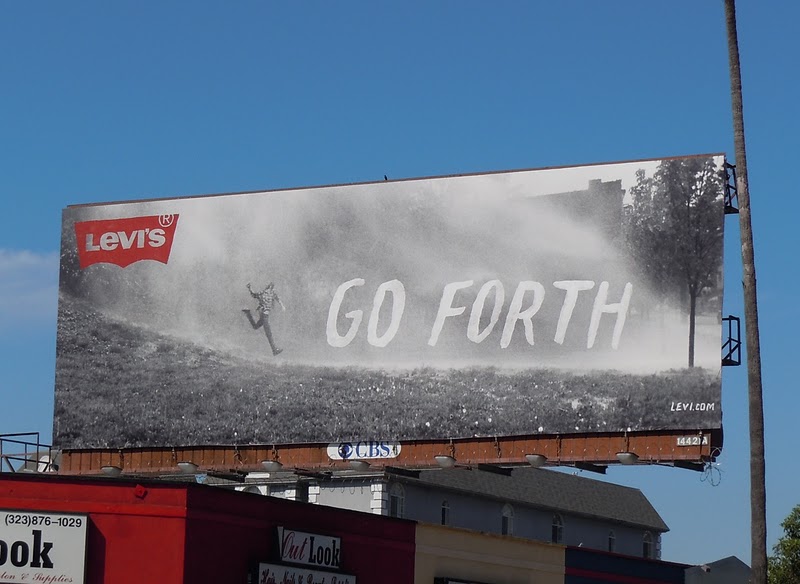 I have been raving about you to everyone on set because it has recently come to my attention that your combination of good product and amazing lifestyle branding have completely won me over. While I was living in New York last year, I went to the movies and your “Go Forth” advertisement featuring a Walt Whitman poem was played before the previews began. That ad (below) is probably the most beautiful ad I’ve ever watched. It’s sexy, raw, and showcases perfectly the glamour and adventure of the West. It made me miss California. The images of crazy kids running around having fun in the wilderness are totally exciting and remind me of my childhood in Yosemite National Park, playing with rocks and twigs every day after school. I also loved how lively and positive these ads are, a call to action to get people inspired (about buying jeans). Here are some of the print ads from the “Go Forth” campaign:

Here’s that amazing commercial I mentioned before:

And another pretty commercial:

And then there’s the more recent “We Are All Workers” campaign, which isn’t quite as visually appealing but is tremendously relevant. I love the way it references Dust Bowl era photography without seeming to demean it. There’s a sense of respect for the travails of Americans during the Depression while somehow glamorizing the fashion and pragmatism of the era. The whole thing feels very Steinbeckian, as if the images were film stills from “East of Eden” or “The Grapes of Wrath.” The literary and cinematic quality of the images gives them an intelligent aura, which makes me want to buy stuff. Here are some of the “We Are All Workers” ads:

And one of the (gorgeously photographed) commercials:

PS: These campaigns were produced by Wieden & Kennedy

PSS: In addition to having awesome ads, you guys also make the best jeans. A tip to the wise: never pay full price. Levi’s stuff always goes on sale and it’s always dirt cheap. Yet another reason I’ve fallen in love.