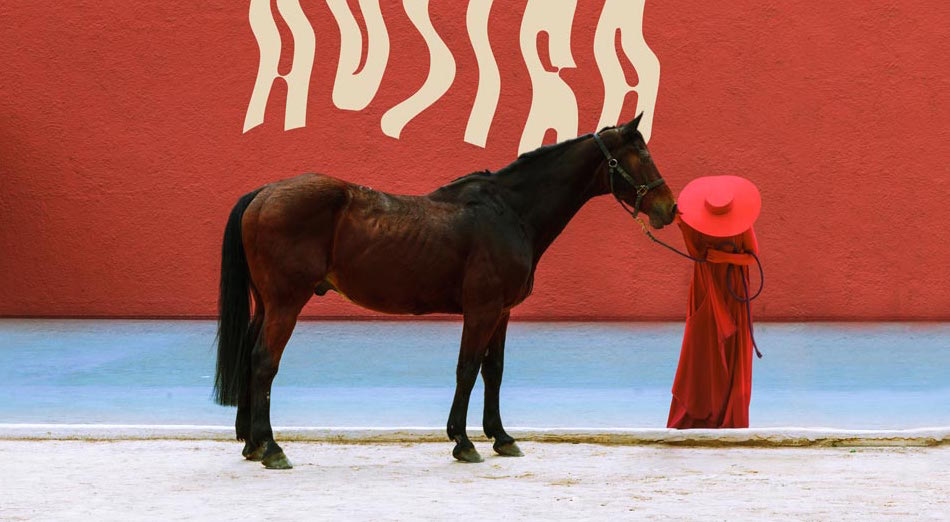 I’ve been obsessed with Austra, the Canadian band headed by Katie Stelmanis, since I heard their song “Lost It” in 2011. I had no idea they weren’t mainstream superstars until last month when I bought four tickets to their LA show and kept inviting friends only to have them be like “WHAT’S AUSTRA???” I found this completely baffling because Austra’s music is so amazing that I figured I’d been late to the game when I first encountered them six years ago. But no, literally none of my idiot friends knew who they were. I ended up finding some people to go to their show with me and it was the best show I’ve ever seen in my life. Like so fun and happy and colorful. Also, I drank lots of tequila and danced my actual butt off.

The band consists of Katie Stelmanis, Maya Postepski, Dorian Wolf, and Ryan Wonsiak. They’re all amazing, but Ryan is really fun and dancy and entertaining. Katie just ran around the stage in a yellow dress that looked like the best curtains on earth, singing like an electro Greek siren. I’m going to stop describing their concert now because that’s boring, but I will say that it was totally inspiring and it changed my life forever and made me realize I need to share them with as many people as possible.

As a designer and sometimes visual artist (I’m working on a series of paintings right now and SUPER excited about them), I find inspiration all over the place. Austra has been an inspiration to me for years. Like for lots of things. Like hiking mountains or lifting weights. Or working on design plans. Or just trying my best to be an art school weirdo, in a fancy beret, rubbing my cheek against a wall. However, it wasn’t until I started writing this post that I realized what a wonderful inspiration they could be for interior design. The many images of the band taken over the years, recording their amazingly creative and gorgeous style, are a great place to get color and style ideas.

Before we go further, you’ll probably want to see some of their videos. You have to click the links below each video because none of their videos allow for embedding on outside sites. I HAVE NO IDEA WHY AND IT’S KINDA RUINING MY LIFE RIGHT NOW BUT IT ALSO LET ME/FORCED ME TO CHOOSE MY FAVE SCREEN GRABS SO THERE’S THAT AND I GUESS I’M THANKFUL OR WHATEVER.

This is the video that made me fall in love with them:

This one I just love because it’s pretty. Like you:

This is my favorite song from their new album, Future Politics:

I You More Than You Love Yourself

In honor of how obsessed with Austra I am, I decided to make color palettes based on images of the band that I love. This might be the nerdiest thing I’ve ever done but it was also the most fun. I should just go to an Austra enthusiasts convention right now dressed as Katie. Literally what the fuck happened to my life?

Anyway, onto the fun color palettes. WHICH ONE WILL YOU CHOSE FOR YOUR NEXT PROJECT?

This one is perfect for a little boy’s room or a yoga studio. Nice and soothing. PERFECT FOR THE APOCALYPSE!

This is the perfect color palette for the girl who has everything except a boyfriend or any idea what’s going on. AKA ME.

Because if you’re going to die, why not do it with PEP?

Everyone you know went to Mexico City this year (WHAT IS GOING ON?) so you might as well paint your house Mexico City colors so they feel exotic and glamorous, yet gritty, when the visit you.

Because deep depression feels much more satisfying when you combine it with a rich aqua-blue color scheme.

That concludes my dork rant about Austra. If there’s a band you love you’d like to see similar color palette inspo drawn from, leave their name in the comments.

You can find more info about them, including if they’re coming to your city any time soon to ROCK YOUR WORLD, on their website.

7 thoughts on “Inspired by Austra”