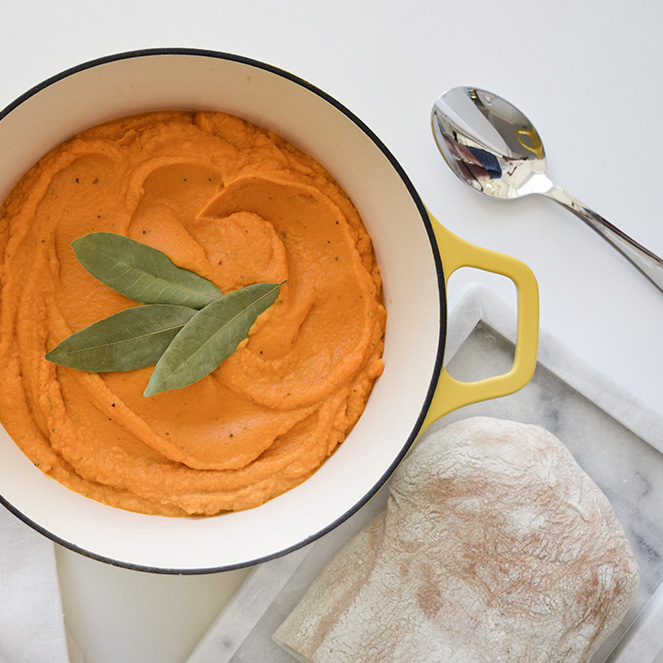 Dear Thankful People Who Love to Chow Down,

I’ve always thought it would be fun to do a Friendsgiving dinner. But my pesky family keeps getting in the way. We do Thanksgiving together every year, making the concept of a friends-only version off the table. But this year, I said “screw it!” I WILL HAVE MY FRIENDSGIVING. So I did what any dinner-party-loving crazy person would do. I had fake Thanksgiving a month before actual Thanksgiving. Luckily, I had a little motivation, as this coincides with my collaboration with American Express to take normal everyday activities (like, say, dinner) and make them epic (like, say, Thanksgiving dinner).

Anyone who has ever hosted Thanksgiving knows the one epic thing about the day is prepping the meal. But I didn’t want to make my guests pitch in at all. I just wanted them to show up to a crazy, elaborate meal without lifting a finger. So I tasked myself with cooking the entire meal myself. It was totally doable but I also kind of lost my mind while doing it, so if you’re going to attempt this I’d make sure you wake up early and be ready to feel like a frazzled rag doll all day (in all honesty, I’m pretty much a frazzled rag doll every day). It’s totally worth the satisfaction of knowing you did everything on your own, but it’s a lot of work.

As anyone will tell you, the most taxing part of Thanksgiving dinner is the turkey. I’d never cooked one before and I had little knowledge of what it entailed. What I wasn’t prepared for is how truly disgusting the whole process would be. Basically, you have to rip out the bird’s insides (for some reason they give you all these turkey pieces and put them inside). The scene of me prepping the turkey was pretty grim. Me, standing alone in the kitchen with my hand inside a wet, cold, salmonella-y bird, listening to sad Sufjan Stevens music and screaming “I USED TO BE A VEGAN” at the ceiling. Handling wet poultry is high on my list of things I’m scared of, so for me this was a very dark moment.

As with all my cooking endeavors, I relied on a Martha Stewart recipe. It’s not that I’m such a blind follower of Martha (although, if she told me to jump off a cliff I would do so without even bothering to ask why), it’s more that I know that every recipe I find on that site is going to be good. So instead of just googling “How to cook a turkey” which, believe me, I did I looked over the recipes on Martha’s site and chose one that sounded delicious and easy (see the full turkey recipe here).

No Thanksgiving meal is complete without some kind of potato situation, so I decided to include a sweet mashed potato side. I used my fun yellow dutch ovens, which made me feel festive and autumnal while cooking.

Boil peeled sweet potatoes until tender enough to pierce easily with a fork. Slice onions into quarter inch thick pieces and sauté in olive oil in a separate pan. Add onions to boiled potatoes and combine using an immersion blender until the consistency is smooth. Add in butter and coconut oil, continuing to blend. Add Herbs de Provence, Salt, and pepper to taste. Garnish with bay leaves, rosemary, or whatever herb you have lying around. If you don’t have any herbs lying around, go to the bathroom and take a long look at yourself in the mirror and ask yourself why you’ve made such terrible life decisions.

No Thanksgiving meal would be complete without delicious Brussels sprouts. I always like Brussels sprouts at restaurants way more than the ones I make at home, so I decided to do something restauranty and add bacon to mine. Also added: crunch. Making these at home I always feel like they lack the crunch of sprouts I eat when I’m at a restaurant. So I decided to bake some of the flakey outer shells to add more texture to the dish.

Also, totally unrelated: CAN WE TALK ABOUT HOW GROSS BRUSSELS SPROUTS SMELL WHEN YOU COOK THEM? Like, why? They’re so good but whenever I cook them for a dinner party I feel so much shame, like I live in a stench-filled witch house. For this reason I made these way ahead of time for Friendsgiving. Also, coating everything in bacon helps mask that WHAT-HAPPENED-IN-HERE!?!-sprout-scent that normally goes along with preparing these tasty nuggets.

In a pan, fry bacon. Leave bacon grease in the pan. Remove cooked bacon from pan and set it on paper towels to dry (and absorb some of the fatty oil). Prepare the Brussels sprouts by halving them and removing the brown part of their stem. Collect loose leaves that fall off during halving in a bowl. Add loose leaves to pan, coating them with the bacon fat (yes, I realize this sounds gross but you have to do it or no one will like your Brussels sprouts. Or you). Place in a baking dish and cook at 450 degrees until lightly browned at the edges. Meanwhile, cook the Brussels sprouts with olive oil in a pan on medium heat until soft. Chop bacon into quarter inch piece and add to cooked sprouts. Add in baked sprout leaves and salt and pepper to taste.

Combine equal parts Spiced Apple Cider, Ginger Beer, and Vodka in a serving pitcher. Add ice and sliced clementines. Garnish with rosemary sprigs and serve over ice. For added pizzaz, attach some rosemary sprigs to the end of your drink stirrer with kitchen string. THIS WILL SHOCK AND DELIGHT YOUR GUESTS.

[Champagne coups are from Crate & Barrel pitcher is from Ikea]

For dessert, I went with my favorite type of pastry, an apple tart. I hate making dough, so I bought ready-made crusts and rolled them out myself. I grew up in a house where we never ate anything pre-made like that, so I’m sure my mother would have dropped her wine glass on the floor if she had seen me doing this, but I honestly can’t tell the difference between a ready-made crust and a homemade one, except for the fact that the homemade ones make me want to scream because they’re so time consuming, flakey, and hard to get exactly right. A fun tip here is that if you avoid those cheap looking crinkly aluminum foil pans with the pre-made crusts already rolled out in them and put the crusts into a ceramic dish like the one above, the whole thing feels a lot more high end and homemade. Even though it’s store bought garbage.

I set the table with my favorite dishes, which are these Ahwahnee plates Edouard bought on a trip to Yosemite last year. This pattern is the traditional pattern of the Ahwahnee Hotel in Yosemite, where I grew up. When I was little we used to play in this hotel ALL the time. Mostly in the elevators. Imagine my terror years later when I saw The Shining for the first time (many of the interior shots of this film were based on the Ahwahnee, which I’ve explored in an old blog post). As you probably know, the elevators play a particularly terrifying role in that film. THERE GOES MY CHILDHOOD!

I bought nearly everything I needed for Friendsgiving at Trader Joe’s (even these cute, autumnal berry branches). A fun fact is that if you use your American Express Blue Cash Everyday Card at a grocery store, you get 3% back! So part of me was happy I was wasting hundreds of dollars on this meal, since I knew I’d be getting some of it back and that would make me feel like I was winning a secret prize.

Even though the turkey was a nightmare do prep, cooking it wasn’t so difficult. All you have to do is make sure that it’s constantly moisturized. Like every 20 minutes. It’s basically like a gay man after age 30: as long as you keep applying moisture it will look delicious and tantalizing. The second you let it dry up, no one is going to be interested ever again. LET THIS MOIST, YOUTHFUL TURKEY BE A LESSON TO ALL OF US TO MOISTURIZE, MOISTURIZE, MOISTURIZE.

My friends told me that my Friendsgiving was a smashing success and they were very impressed I’d cooked a whole Thanksgiving dinner all alone. And that’s when I turned to the camera and screamed, THANKS AMERICAN EXPRESS – FOR TAKING THIS NORMAL/BORING SATURDAY AND MAKING IT EPIC.

…Speaking of epic, I wanted to share a few amazing recipes from Buzzfeed and American Express that inspired me to create my own Friendsgiving so out of this world, and might inspire you too. Check them out here.

Editor’s Note: I swear, there were actually people at my Friendsgiving. I know that these pics make it look like I ate with a group of ghosts, but it was an evening filled with real, non-phantasm friends who loved my signature cocktail and told me the turkey was moist (are you one of the people that hates that word? I’m kinda not tbh. Just think about all the delicious moist cakes and cookies you’ve eaten in your lifetime. MMMMM!). I kinda stopped taking pics by the time people arrived because I was rushing to get everything done. Also, it was pretty dark so I the few pics I did take made everyone look like a gargoyle. I just wanted to explain this because I didn’t want you picturing me eating this whole turkey alone while crying about being alone. Not that that’s not something I wouldn’t do. It’s just not what happened this time.

This post was created in collaboration with American Express. All ideas and opinions expressed are genuine and my own.